BDR provides loosely coupled, multi-master logical replication using a mesh topology. This means that you can write to any server and the changes are sent directly, row-by-row, to all the other servers that are part of the same BDR group. 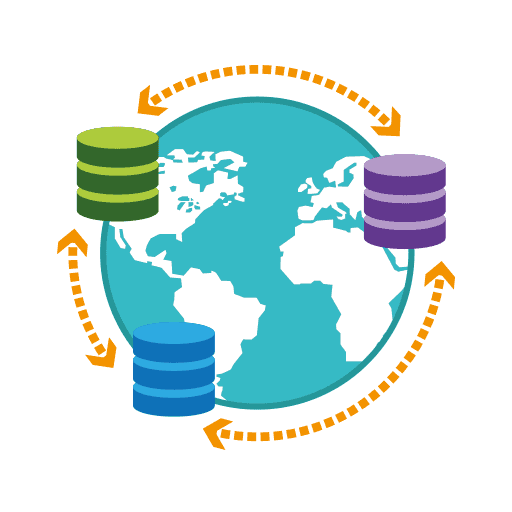 By default, BDR uses asynchronous replication, applying changes on the peer nodes only after the local commit. An optional Eager All-Node Replication feature allows for committing on all nodes using consensus.

A BDR node is a member of at least one node group, and in the most basic architecture there is a single node group for the whole BDR cluster.

Each node (database) participating in a BDR group both receives changes from other members and can be written to directly by the user.

This is distinct from hot or warm standby, where only one master server accepts writes, and all the other nodes are standbys that replicate either from the master or from another standby.

You don't have to write to all the masters all of the time. A frequent configuration directs writes mostly to just one master.

Changes made on one BDR node aren't replicated to other nodes until they're committed locally. As a result, the data isn't exactly the same on all nodes at any given time. Some nodes have data that hasn't yet arrived at other nodes. PostgreSQL's block-based replication solutions default to asynchronous replication as well. In BDR, because there are multiple masters and, as a result, multiple data streams, data on different nodes might differ even when synchronous_commit and synchronous_standby_names are used.

BDR is structured around a mesh network where every node connects to every other node and all nodes exchange data directly with each other. There's no forwarding of data in BDR except in special circumstances such as adding and removing nodes. Data can arrive from outside the BDR cluster or be sent onwards using native PostgreSQL logical replication.

Logical replication is a method of replicating data rows and their changes based on their replication identity (usually a primary key). We use the term logical in contrast to physical replication, which uses exact block addresses and byte-by-byte replication. Index changes aren't replicated, thereby avoiding write amplification and reducing bandwidth.

Logical replication starts by copying a snapshot of the data from the source node. Once that is done, later commits are sent to other nodes as they occur in real time. Changes are replicated without re-executing SQL, so the exact data written is replicated quickly and accurately.

Nodes apply data in the order in which commits were made on the source node, ensuring transactional consistency is guaranteed for the changes from any single node. Changes from different nodes are applied independently of other nodes to ensure the rapid replication of changes.

Replicated data is sent in binary form, when it's safe to do so.

Replication continues between currently connected nodes even if one or more nodes are currently unavailable. When the node recovers, replication can restart from where it left off without missing any changes.

Nodes can run different release levels, negotiating the required protocols to communicate. As a result, BDR clusters can use rolling upgrades, even for major versions of database software.

DDL is replicated across nodes by default. DDL execution can be user controlled to allow rolling application upgrades, if desired.

BDR can run hundreds of nodes on good-enough hardware and network. However, for mesh-based deployments, we generally don't recommend running more than 32 nodes in one cluster. Each master node can be protected by multiple physical or logical standby nodes. There's no specific limit on the number of standby nodes, but typical usage is to have 2–3 standbys per master. Standby nodes don't add connections to the mesh network, so they aren't included in the 32-node recommendation.

BDR currently has a hard limit of no more than 1000 active nodes, as this is the current maximum Raft connections allowed.

The minimum recommended number of nodes in a BDR cluster is three to provide fault tolerance for BDR's consensus mechanism. With just two nodes, consensus would fail if one of the nodes was unresponsive. Consensus is required for some BDR operations such as distributed sequence generation. For more information about the consensus mechanism used by EDB Postgres Distributed, see Architectural details.

BDR can be configured in a number of different architectures, each of which has different performance and scalability characteristics.

The group is the basic building block of a BDR group consisting of 2+ nodes (servers). In a group, each node is in a different availability zone, with dedicated router and backup, giving immediate switchover and high availability. Each group has a dedicated replication set defined on it. If the group loses a node, you can easily repair or replace it by copying an existing node from the group.

Adding more master nodes to a BDR group doesn't result in significant write throughput increase when most tables are replicated because BDR has to replay all the writes on all nodes. Because BDR writes are in general more effective than writes coming from Postgres clients by way of SQL, some performance increase can be achieved. Read throughput generally scales linearly with the number of nodes.

The following architectures are available:

The simplest architecture is to have just one group.

BDR multi-master in one group

By default, BDR keeps one copy of each table on each node in the group, and any changes propagate to all nodes in the group.

Since copies of data are everywhere, SELECTs need only ever access the local node. On a read-only cluster, performance on any one node isn't affected by the number of nodes. Thus, adding nodes increases linearly the total possible SELECT throughput.

If an INSERT, UPDATE, and DELETE (DML) is performed locally, then the changes propagate to all nodes in the group. The overhead of DML apply is less than the original execution, so if you run a pure write workload on multiple nodes concurrently, a multi-node cluster can handle more TPS than a single node.

Eager Replication can avoid conflicts but is inherently more expensive.

Changes are sent concurrently to all nodes so that the replication lag is minimized. Adding more nodes means using more CPU for replication, so peak TPS reduces slightly as each node is added.

If the workload tries to use all CPU resources, then this resource constrains replication, which can then affect the replication lag.

The AlwaysOn architecture is built from two groups in two separate regions. Each group provides HA and IS, but together they also provide disaster recovery (DR), so we refer to this architecture as AlwaysOn with very high availability.

Tables are created across both groups, so any change goes to all nodes, not just to nodes in the local group.

One node is the target for the main application. All other nodes are described as shadow nodes (or "read-write replica"), waiting to take over when needed. If a node loses contact, we switch immediately to a shadow node to continue processing. If a group fails, we can switch to the other group. Scalability isn't the goal of this architecture.

Since we write mainly to only one node, the possibility of contention between is reduced to almost zero. As a result, performance impact is much reduced.

CAMO is Eager Replication in the local group, lazy with regard to other groups.

Secondary applications might execute against the shadow nodes, although these are reduced or interrupted if the main application begins using that node.

In the future, one node will be elected as the main replicator to other groups, limiting CPU overhead of replication as the cluster grows and minimizing the bandwidth to other groups.

BDR is intended to be deployed in one of a small number of known-good configurations, using either TPAexec or a configuration management approach and deployment architecture approved by Technical Support.

Manual deployment isn't recommended and might not be supported.

Refer to the TPAexec Architecture User Manual for your architecture.

Log messages and documentation are currently available only in English.

BDR is designed to operate with nodes in multiple timezones, allowing a truly worldwide database cluster. Individual servers don't need to be configured with matching timezones, although we do recommend using log_timezone = UTC to ensure the human-readable server log is more accessible and comparable.