High Availability Routing for Postgres (HARP) is a new approach for managing high availabiliity for EDB Postgres Distributed clusters versions 3.6 or later. All application traffic within a single location (data center or region) is routed to only one BDR node at a time in a semi-exclusive manner. This node, designated the lead master, acts as the principal write target to reduce the potential for data conflicts.

Together with the core capabilities of the BDR extension, this mechanism of routing application traffic to the lead master node enables fast failover and switchover without risk of data loss.

The importance of quorum

The central purpose of HARP is to enforce full quorum on any EDB Postgres Distriibuted cluster it manages. Quorum is a term applied to a voting body that mandates a certain minimum of attendees are available to make a decision. More simply: majority rules.

For any vote to end in a result other than a tie, an odd number of nodes must constitute the full cluster membership. Quorum, however, doesn't strictly demand this restriction; a simple majority is enough. This means that in a cluster of N nodes, quorum requires a minimum of N/2+1 nodes to hold a meaningful vote.

All of this ensures the cluster is always in agreement regarding the node that is "in charge." For a EDB Postgres Distributed cluster consisting of multiple nodes, this determines the node that is the primary write target. HARP designates this node as the lead master.

The consequence of ignoring the concept of quorum, or not applying it well enough, can lead to a "split brain" scenario where the "correct" write target is ambiguous or unknowable. In a standard EDB Postgres Distributed cluster, it's important that only a single node is ever writable and sending replication traffic to the remaining nodes.

Even in multi-master-capable approaches such as BDR, it can be helpful to reduce the amount of necessary conflict management to derive identical data across the cluster. In clusters that consist of multiple BDR nodes per physical location or region, this usually means a single BDR node acts as a "leader" and remaining nodes are "shadow". These shadow nodes are still writable, but writing to them is discouraged unless absolutely necessary.

By leveraging quorum, it's possible for all nodes to agree on the exact Postgres node to represent the entire cluster or a local BDR region. Any nodes that lose contact with the remainder of the quorum, or are overruled by it, by definition can't become the cluster leader.

This restriction prevents split-brain situations where writes unintentionally reach two Postgres nodes. Unlike technologies such as VPNs, proxies, load balancers, or DNS, you can't circumvent a quorum-derived consensus by misconfiguration or network partitions. So long as it's possible to contact the consensus layer to determine the state of the quorum maintained by HARP, only one target is ever valid.

The design of HARP comes in essentially two parts, consisting of a manager and a proxy. The following diagram describes how these interact with a single Postgres instance: 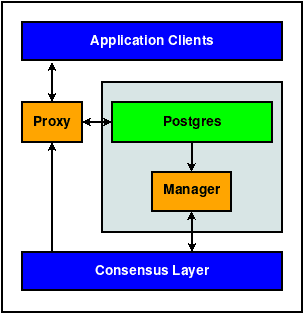 While using BDR as the consensus layer, each server node resembles this variant instead: 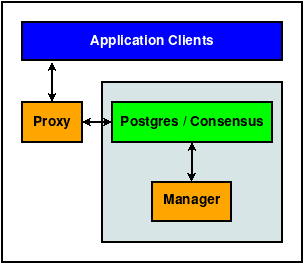 In either case, each unit consists of the following elements:

Not every application stack has access to additional node resources specifically for the Proxy component, so it can be combined with the application server to simplify the stack.

This is a typical design using two BDR nodes in a single data center organized in a lead master/shadow master configuration: 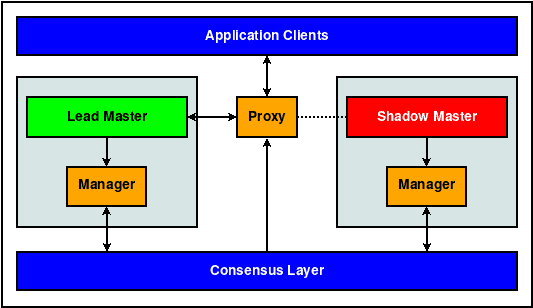 When using BDR as the HARP consensus layer, at least three fully qualified BDR nodes must be present to ensure a quorum majority. (Not shown in the diagram are connections between BDR nodes.)

When managing an EDB Postgres Distributed cluster, HARP maintains at most one leader node per defined location. This is referred to as the lead master. Other BDR nodes that are eligible to take this position are in shadow master state until they take the leader role.

Applications can contact the current leader only through the proxy service. Since the consensus layer requires quorum agreement before conveying leader state, proxy services direct traffic to that node.

At a high level, this mechanism prevents simultaneous application interaction with multiple nodes.

As an example, consider the role of lead master in a locally subdivided BDR Always On group as can exist in a single data center. When any Postgres or Manager resource is started, and after a configurable refresh interval, the following must occur:

A lot more occurs, but this simplified version explains what's happening. The leader lease can be held by only one node, and if it's held elsewhere, HARP Manager gives up and tries again later.

Depending on the chosen consensus layer, rather than repeatedly looping to check the status of the leader lease, HARP subscribes to notifications. In this case, it can respond immediately any time the state of the lease changes rather than polling. Currently this functionality is restricted to the etcd consensus layer.

This means HARP itself doesn't hold elections or manage quorum, which is delegated to the consensus layer. A quorum of the consensus layer must acknowledge the act of obtaining the lease, so if the request succeeds, that node leads the cluster in that location.

Once the role of the lead master is established, connections are handled with a similar deterministic result as reflected by HARP Proxy. Consider a case where HARP Proxy needs to determine the connection target for a particular backend resource:

The interplay shown in this case doesn't require any interaction with either HARP Manager or Postgres. The consensus layer is the source of all truth from the proxy's perspective.

The arrangement of the work units is such that their organization must follow these principles:

This arrangement delegates cluster quorum responsibilities to the consensus layer, while HARP leverages it for critical role assignments and key/value storage. Neither storage nor retrieval succeeds if the consensus layer is inoperable or unreachable, thus preventing rogue Postgres nodes from accepting connections.

As a result, the consensus layer generally exists outside of HARP or HARP-managed nodes for maximum safety. Our reference diagrams show this separation, although it isn't required.

To operate and manage cluster state, BDR contains its own implementation of the Raft Consensus model. You can configure HARP to leverage this same layer to reduce reliance on external dependencies and to preserve server resources. However, certain drawbacks to this approach are discussed in Consensus layer.

Recommended architecture and use

HARP was primarily designed to represent a BDR Always On architecture that resides in two or more data centers and consists of at least five BDR nodes. This configuration doesn't count any logical standby nodes.

The following diagram shows the current and standard representation: While this diagram shows only a single HARP Proxy per DC, this is an example only and should not be considered a single point of failure. Any number of HARP Proxy nodes can exist, and they all direct application traffic to the same node.

For multiple BDR nodes to be eligible to take the lead master lock in a location, you must define a location in the config.yml configuration file.

To reproduce the BDR Always On reference architecture shown in the diagram, include these lines in the config.yml configuration for BDR Nodes 1 and 2:

This applies to any HARP Proxy nodes that are designated in those respective data centers as well.