Configuring a replication scenario can be complex. For detailed information about configuration options, see the PostgreSQL core documentation.

You might want to use a .pgpass file to enable md5 authentication for the replication user. This might not be the safest authentication method for your environment. For more information about the supported authentication options, see the PostgreSQL core documentation.

From Version 3.10 onwards, Failover Manager uses pg_ctl utility for standby promotion. You don't need to set the trigger_file or promote_trigger_file parameter for promotion of a standby server. 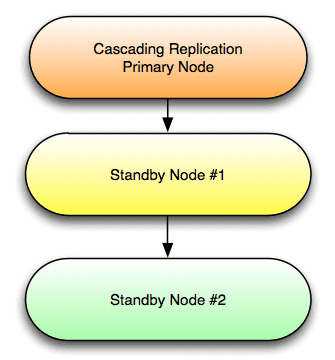 To use Failover Manager in a cascading replication scenario, modify the cluster properties file, setting the following property values on standby node #2:

In the event of a failover, standby node #1 is promoted to the role of primary node. If failover occurs, standby node #2 continues to act as a read-only replica for the new primary node until you take actions to manually reconfigure the replication scenario to contain three nodes.

In the event of a failure of standby node #1, you won't have failover protection, but you'll receive an email notifying you of the failure of the node.

Performing a switchover and switch back to the original primary might not preserve the cascading replication scenario.