EnterpriseDB has enhanced ECPG (the PostgreSQL pre-compiler) to create ECPGPlus. ECPGPlus is a Pro*C-compatible version of the PostgreSQL C pre-compiler. ECPGPlus translates a program that combines C code and embedded SQL statements into an equivalent C program. As it performs the translation, ECPGPlus verifies that the syntax of each SQL construct is correct.

The following diagram charts the path of a program containing embedded SQL statements as it is compiled into an executable: 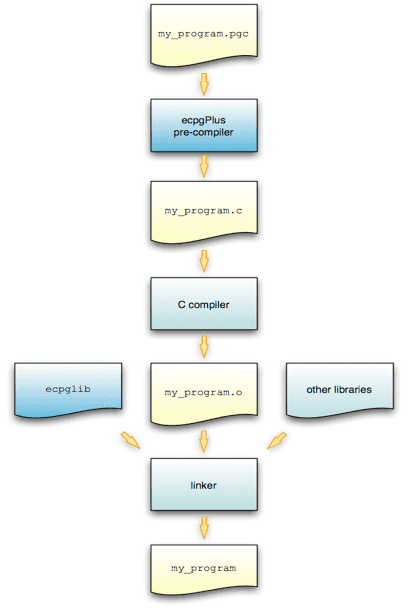 A client application contains a mix of C code and SQL code comprised of the following elements:

In the above code fragment:

Any SQL statement must be prefixed with EXEC SQL and extends to the next (unquoted) semicolon. For example:

When the preprocessor encounters the code fragment shown above, it passes the C code (the first line and the last line) to the output file without translation and converts each EXEC SQL statement into a call to an ecpglib function. The result would appear similar to the following:

On Windows, ECPGPlus is installed by the Advanced Server installation wizard as part of the Database Server component. On Linux, install with the edb-asxx-server-devel RPM package where xx is the Advanced Server version number. By default, the executable is located in:

A makefile contains a set of instructions that tell the make utility how to transform a program written in C (that contains embedded SQL) into a C program. To try the examples in this guide, you will need:

The following code is an example of a makefile for the samples included in this guide. To use the sample code, save it in a file named makefile in the directory that contains the source code file.

The first two lines use the pg_config program to locate the necessary header files and library directories:

The pg_config program is shipped with Advanced Server.

make knows that it should use the CFLAGS variable when running the C compiler and LDFLAGS and LDLIBS when invoking the linker. ECPG programs must be linked against the ECPG run-time library (-lecpg) and the libpq library (-lpq)

The sample makefile instructs make how to translate a .pgc or a .pc file into a C program. Two lines in the makefile specify the mode in which the source file will be compiled. The first compile option is:

The first option tells make how to transform a file that ends in .pgc (presumably, an ECPG source file) into a file that ends in .c (a C program), using community ECPG (without the ECPGPlus enhancements). It invokes the ECPG pre-compiler with the -c flag (instructing the compiler to convert SQL code into C), using the value of the INCLUDES variable and the name of the .pgc file.

The second option tells make how to transform a file that ends in .pg (an ECPG source file) into a file that ends in .c (a C program), using the ECPGPlus extensions. It invokes the ECPG pre-compiler with the -c flag (instructing the compiler to convert SQL code into C), as well as the -C PROC flag (instructing the compiler to use ECPGPlus in Pro*C-compatibility mode), using the value of the INCLUDES variable and the name of the .pgc file.

In the sample makefile shown above, make includes the -C option when invoking ECPGPlus to specify that ECPGPlus should be invoked in Pro*C compatible mode.

If you include the -C PROC keywords on the command line, in addition to the ECPG syntax, you may use Pro*C command line syntax; for example:

To display a complete list of the other ECPGPlus options available, navigate to the ECPGPlus installation directory, and enter:

The command line options are: