Adding a graphical interface to a Java program v42.3.3.1

With a little extra work, you can add a graphical user interface to a program. The next example shows how to write a Java application that creates a JTable (a spreadsheet-like graphical object) and copies the data returned by a query into that JTable.

The following sample application is a method, not a complete application. To call this method, provide an appropriate main() function and wrapper class.

Before writing the showEmployees() method, you must import the definitions for a few JDK-provided classes:

showEmployees() creates a Statement and uses the executeQuery() method to execute an SQL query that generates an employee list:

Next, showEmployees() creates a vector (a one-dimensional array) to hold the column headers and then copies each header from the ResultMetaData object into the vector:

With the column headers in place, showEmployees() extracts each row from the ResultSet and copies it into a new vector (named rows). The rows vector is actually a vector of vectors: each entry in the rows vector contains a vector that contains the data values in that row. This combination forms the two-dimensional array that you need to build a JTable. After creating the rows vector, the program reads through each row in the ResultSet (by calling rs.next()). For each column in each row, a getter method extracts the value at that row/column and adds the value to the rowValues vector. Finally, showEmployee() adds each rowValues vector to the rows vector:

At this point, the vector (labels) contains the column headers, and a second two-dimensional vector (rows) contains the data for the table. Now you can create a JTable from the vectors and a JFrame to hold the JTable:

The showEmployees() method includes a catch block to intercept any errors that occur and display an appropriate message to the user:

The result of calling the showEmployees() method is shown in figure: 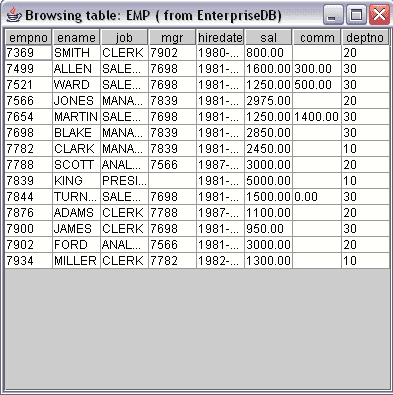