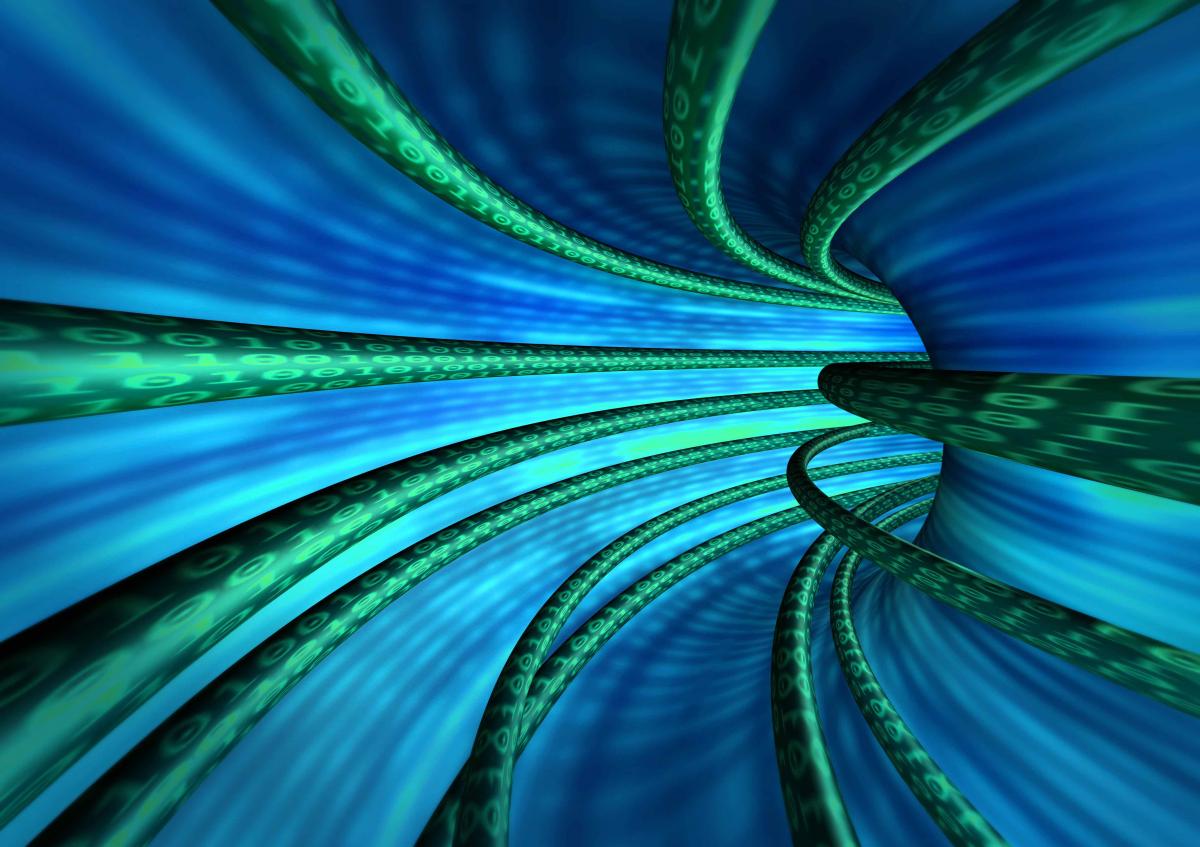 PostgreSQL 9.6 and 10 can use all three join strategies in parallel query plans, but they can only use a partial plan on the outer side of the join. As of commit 18042840, assuming nothing irreparably busted is discovered in the next few months, PostgreSQL 11 will ship with Parallel Hash. Partial plans will be possible on both sides of a join for the first time.

There will certainly be some adjustments before it's released, but it seems like a good time to write a blog article to present Parallel Hash. This is the biggest feature I've worked on in PostgreSQL so far, and I'm grateful to the reviewers, testers, committers and mentors of the PostgreSQL hacker community and EnterpriseDB for making this work possible.

So what does this feature really do?

Using the "orders" and "lineitem" tables from TPC-H scale 30GB, here is a very simple join query answering the (somewhat contrived) question "how many lineitems have there ever been, considering only orders over $5.00?".

PostgreSQL 9.6 or 10 can produce a query plan like this:

Using the development master branch, it can now also produce a query plan like this:

Here's a graph showing the effect of that plan change as you add more workers. The Y axis shows the speed-up compared to a non-parallel query. 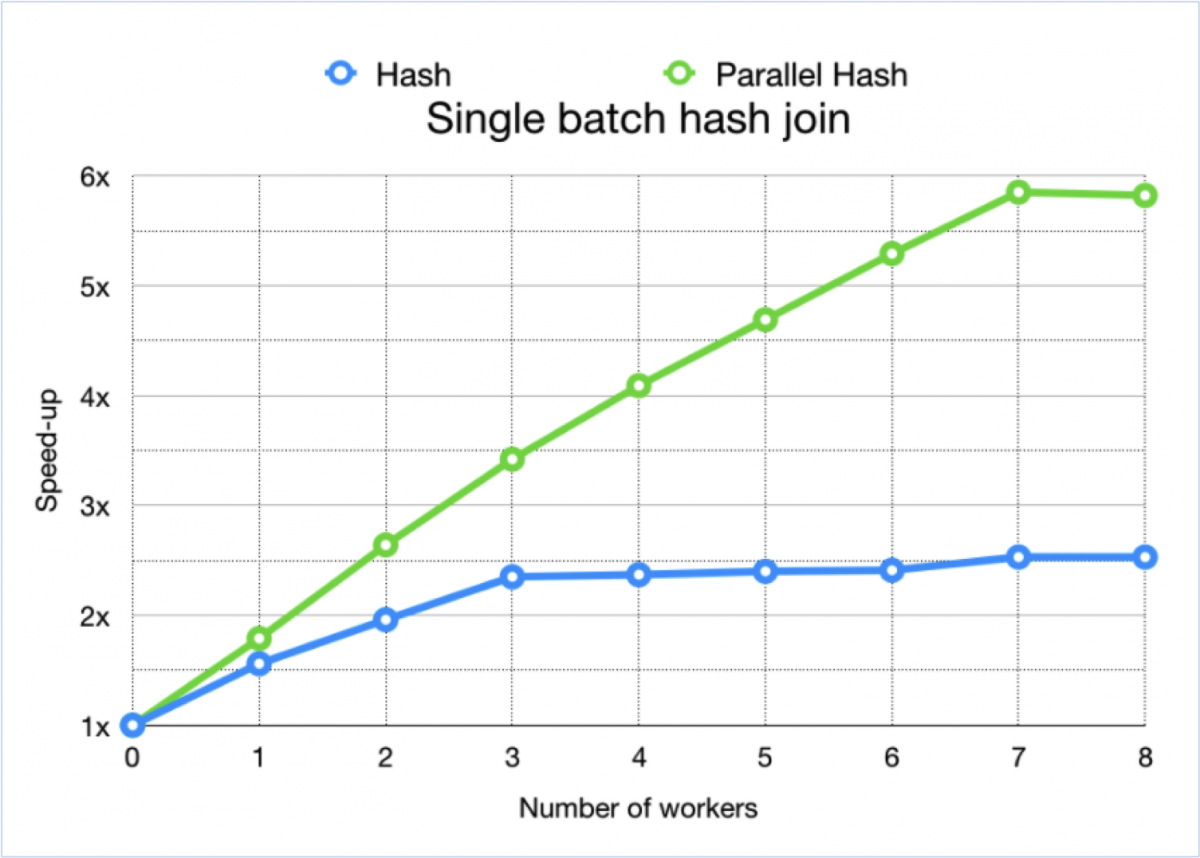 It's not quite scaling perfectly and it's plateauing at 8 processes for reasons that need further exploration, but it is scaling significantly better than before. So where does this improved scalability come from? Let's start by looking at a stylised execution timeline for the join without parallelism:

Now let's visualise the execution timeline for a parallel query version with three processes in PostgreSQL 10 (or in 11dev with enable_parallel_hash set to off):

Here we see that the outer plan has been divided up over our 3 CPU cores. Each one is scanning an arbitrary fraction of the tuples in lineitem. Unfortunately each one is also running the complete inner plan and building its own copy of the hash table. So now we have approximately inner plan time + (outer plan time ÷ processes).

This calls to mind Amdahl's law about the maximum speed-up possible if you parallelise one part of an algorithm but not another, but in practice there may be something worse than that going on here: every process is doing the same work in parallel, creating various forms of contention on the system that get worse as you add more workers.

Note that this type of plan is certainly not always bad: if the inner plan is small and fast it may win out over the new alternative by skipping overheads (see below).

Now we have divided the work of running the inner plan by our number of CPU cores, for a total of approximately (inner plan time + outer plan time) ÷ processes.

Note the dotted line that appears between the processing of the inner plan and the outer plan. That represents a barrier.  Since they are now sharing a single hash table, all processes have to agree that the hash table is complete before it's safe for anyone to begin probing it. Note also that I show the workers completing the scan at slightly different times (exaggerated for illustration): this is because participating processes work in chunks sometimes called the 'parallel grain', which in this case come from the 8KB disk blocks into which Parallel Seq Scan chops the scan. When the end of the scan is reached, each process runs out of pages and then waits at the barrier. The waiting time is bounded and typically very short because whenever any process runs out of pages every other processes can only be at most one page away from reaching the end too. (If the parallel grain is increased, say because PostgreSQL switches to larger sequential scan grain, or if something expensive is being done with tuples in between scanning and inserting into the hash table, or if the parallel grain is not block-based but instead Parallel Append running non-partial plans, then the expected wait time might increase.)

When the hash table doesn't fit in memory, we partition both sides of the join into some number of batches. One controversial position taken by Parallel Hash is that parallel-aware executor nodes should be allowed a total memory budget of work_mem × processes to use or divide up as they see fit. Parallel Hash's approach is to create a gigantic shared hash table if that can avoid having to partition, but otherwise falls back to individual batches sized to fit into work_mem, several of which can be worked on at the same time.

Without Parallel Hash, the timeline can be illustrated like this (the batches should probably be smaller than they are in this time line but I made them larger for readability):

Things look rather different for a multi-batch Parallel Hash query:

The first thing to note is that batches are processed in parallel rather than sequentially. Processes try to work on different batches to the extent possible, and then help each other out with whatever remains. This is primarily a strategy for avoiding deadlock hazard (about which a bit more below), but it might also have some contention avoidance and cache hit ratio benefits. It also looks a little bit more like the way some other RDBMSs parallelise hash joins (see below).

The scalability improvement plateaus sooner when the join must be partitioned (in this case by setting work_mem = '128MB', while the single-batch graph used a much higher setting to avoid batching), for reasons that need more study: 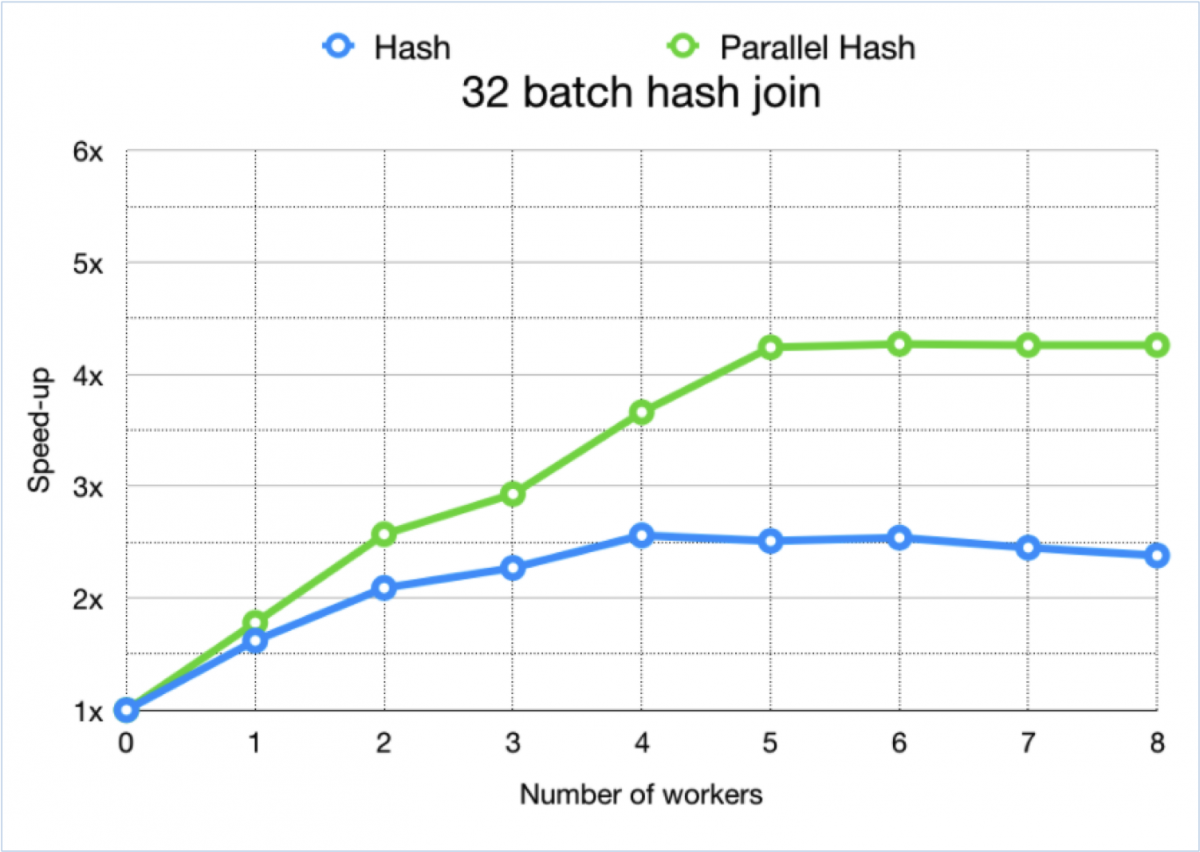 PostgreSQL supports three join strategies, and they benefit from parallelism as follows:

Many other RDBMSs support parallel hash joins.  To my knowledge, they all do so using a partition-first strategy. (If you know of another RDBMS that does no-partition parallel hash joins please let me know! The only example I'm aware of is Berkeley POSTGRES 4.2's parallel hash join, which was removed before the project was open-sourced and is unrelated to this work.) First they partition all data on both sides of the join and then they process each partition separately in different threads. Some RDBMSs partition with the sole aim of splitting data up evenly over the threads, while others also aim to produce sufficiently many tiny hash tables to eliminate cache misses at probe time. As shown above, PostgreSQL's Parallel Hash can do a very simple kind of partitioning if required because of lack of work_mem, but it prefers to create one big shared hash table. Even when it switches to the partitioning strategy, all processes have shared access to them so they can help with other partitions if they run out of work to do. Why did we take this different approach? Some influencing factors:

In Design and Evaluation of Main Memory Hash Join Algorithms for Multi-Core CPUs, Blanas et al said: "Our analysis reveals some interesting results – a very simple hash join algorithm is very competitive to the other more complex methods. This simple join algorithm builds a shared hash table and does not partition the input relations. Its simplicity implies that it requires fewer parameter settings, thereby making it far easier for query optimizers and execution engines to use it in practice. Furthermore, the performance of this simple algorithm improves dramatically as the skew in the input data increases, and it quickly starts to outperform all other algorithms. Based on our results, we propose that database implementers consider adding this simple join algorithm to their repertoire of main memory join algorithms, or adapt their methods to mimic the strategy employed by this algorithm, especially when joining inputs with skewed data distributions."

For a nice overview of this area and the two papers linked above, I highly recommend Andy Pavlo's CMU 15-721 lecture Parallel Join Algorithms (Hashing) (or just the slides).

All that said, nothing rules out a partitioning-first strategy being developed in the future.

Here are some of the obstacles I encountered on this journey. This section may be the least interesting for others, but writing it down at least has some therapeutic value for me! First, there were high level design problems for Parallel Hash relating to deadlocks with other executor nodes:

A number of infrastructural obstacles had to be overcome too, resulting in a whole stack of patches.  In no particular order:

To think that Robert Haas encouraged me to have a crack at Parallel Hash because it seemed pretty easy.  Hah!

Thomas Munro is a Senior Database Architect at EnterpriseDB.