Open source is not new. It’s been around for over 20 years. In fact, free software has been around even longer—but "free" does not equal "open source." This blog will discuss the history of open source, define it, and explain how it has become so relevant in modern corporate technologies. We’ll review its growth and its relevance today.

Let's start by defining open source. Open source does not just refer to being free. Open source means having access to the actual source code of what’s happening inside of technology. It’s about having a community of collaborative people with a singular goal of evolving and improving the technology. But most importantly, it is about licensing. Open source software—and those firms that help evolve it—bring a new level of flexibility, unlike traditional software companies.

The rigid, one-sided terms of proprietary vendors like Oracle, IBM, and Microsoft are designed to extract more money from organizations and lock in customers. They burden companies with constant renegotiations. The desire for organizations to have a degree of "contractual emancipation" is a big driver of open source.

When looking back on the origin of open source, its catalyst was really Linux starting as a free downloadable kernel in the 1990s. In the mid 90s, University of California Berkeley Professor Michael Stonebraker made Postgres available with its source code. But the real moment open source came into being was a meeting in January of 1998 as a result of the browser wars between Microsoft and Netscape. Out of that meeting came the decision to make the Navigator browser source code available to the public. The phrase “open source” was also coined by Christine Peterson.

The very next day, Linus Torvald made the Linux source available for download. And within 30 days following, a new group called The Open Source Initiative was founded with the purpose of propagating and defining open source. 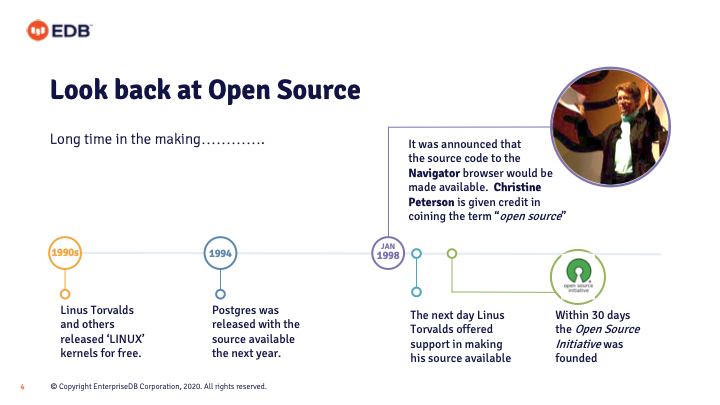 How to Hone Open Source

But with the advent of open source came lawsuits to test and further define what qualified as open source. Examples include the ominous SCO vs. IBM battle over who owned the right to UNIX, as well as Wordpress open source taking on WIX in the web content world. Another example is Oracle's acquisition of SUN and all the subsequent challenges to that acquisition, along with what it meant to Java, MySQL and the like. But these were mostly battles that were settled in the first decade of the 21st century. 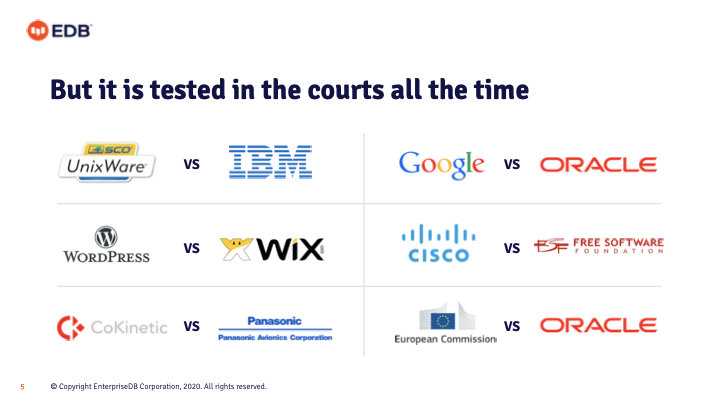 Yet, open source for the sake of open source only becomes relevant when you surround the technology with other needed "components" that make it enterprise-ready. Things that are "free" tend to be perceived as having zero value. Organizations define value in the context of broader expectations like:

But what has really made open source so successful is price. Significant cost savings. During our current stage of hardware and cloud evolution, along with Moore's Law making available so much in compute, storage, and networking, open source is where innovation is happening. It provides the fuel to what’s next. 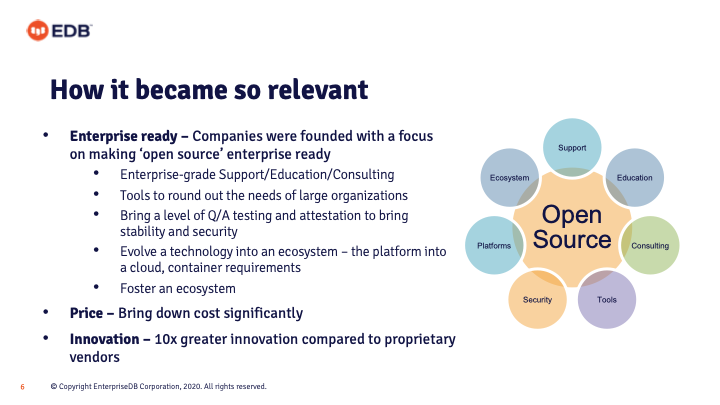 Let's consider how open source is so pervasive everywhere. Android phones, set-top boxes, and even smart doorbells are all based on open source technologies. Corporate IT teams are also seeing proliferation in development between operating systems, the application server, the programming languages, and the databases have been moving to open source. We even see how tools used in things like data science (with R and Jupyter notebooks), provisioning with Ansible, and web content with Wordpress are the new normal. 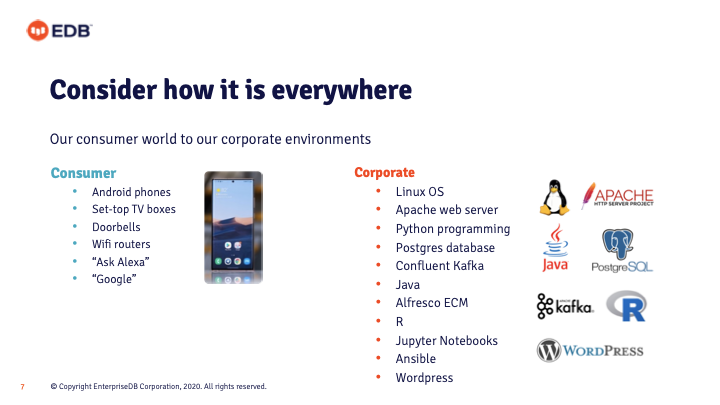 But just like an airplane flying in the sky, corporate technology and digital transformation encounter headwinds and tailwinds as they try to move forward. In August 2020, I was part of a market research effort with Platform3 Solutions that resulted in a paper that describes these drivers and impediments of digital transformation.’ 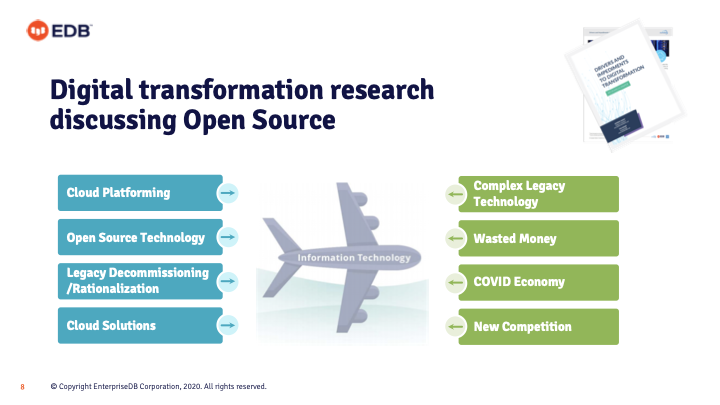 As part of this research, two questions in particular garner immediate attention. The first asks respondents about their organizations’ top priority. Even as we are in a global pandemic, over two thirds indicate that the focus is "transformational" in nature. The other  question asks: “Do you think there was wasted money and keeping old tech alive in your organization?” Fully 83% answer YES, with 25% answering “Yes, significant amounts.” 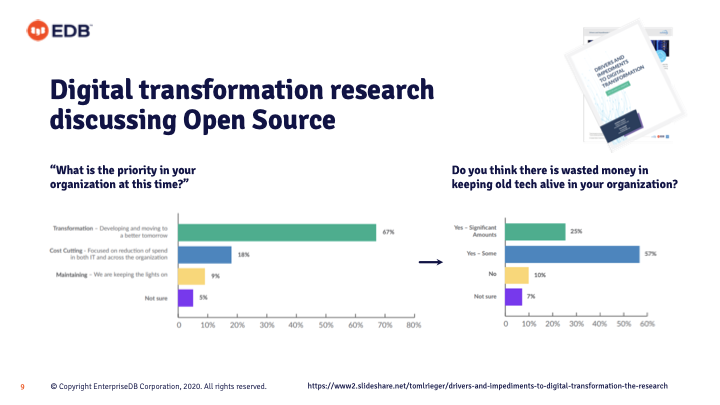 Finally, within this research respondents were asked whether they saw open source as a strategic imperative. Over half answered YES, with many indicating that it is a primary topic of discussion in their organizations. Broken down by industry, our survey revealed that banking, energy, and insurance are showing a large pivot as the technology industry was always focused in that arena. 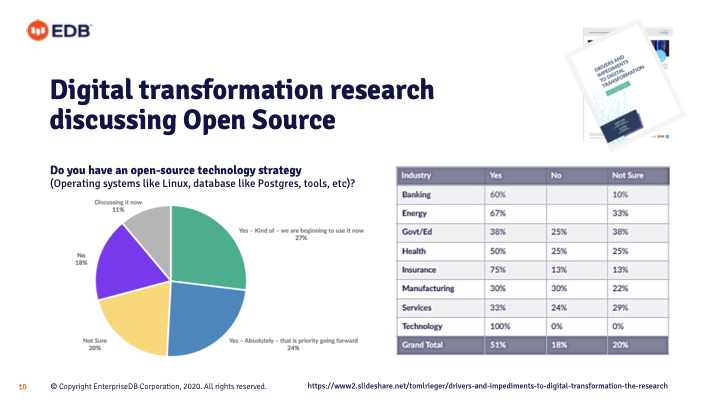 If litigation is one of a first set of actions that defines open-source, the next is the funding and capitalization.  When IBM paid $34 billion for Red Hat, it garnered a lot of attention.  But also consider the acquisition of Github by Microsoft for $7.5B and Salesforce’s purchase of open-source Mulesoft for $6.5B.  From an investment perspective, companies that have brought value to open source—like Databricks around Apache Spark, Confluent with Kafka, and EDB with Postgres—have reached over $1 billion in valuations. 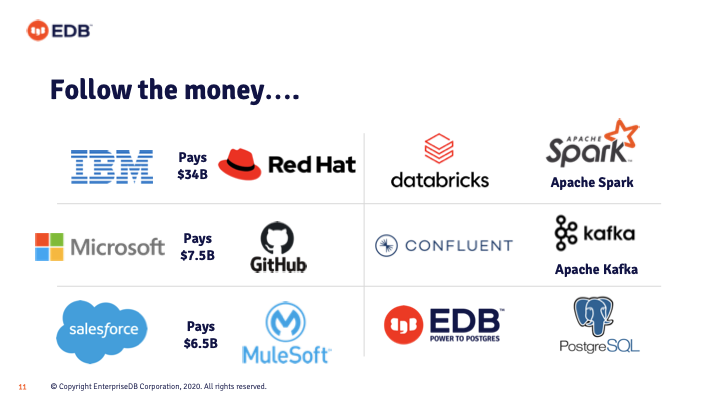 A Look at What’s Next

That brings us up to 2021. Let’s look at what is next for open source. One of the most trusted players in market research is Gartner, and their primary look-forward is their "hype cycles."  Giving another point of validation for open source, Gartner has a hype cycle focused on it. What is most compelling compared to most hype cycles is the shorter time window within which they think a lot of this technology will reach its "plateau"—mostly in the next 2-5 years. 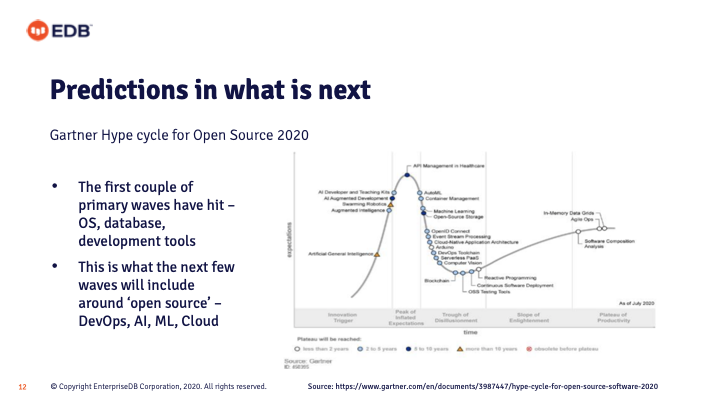 The future of open source is not in question—the question is how quickly organizations will adopt it across their technology landscape and turn into that ‘tail wind’ of transformation. 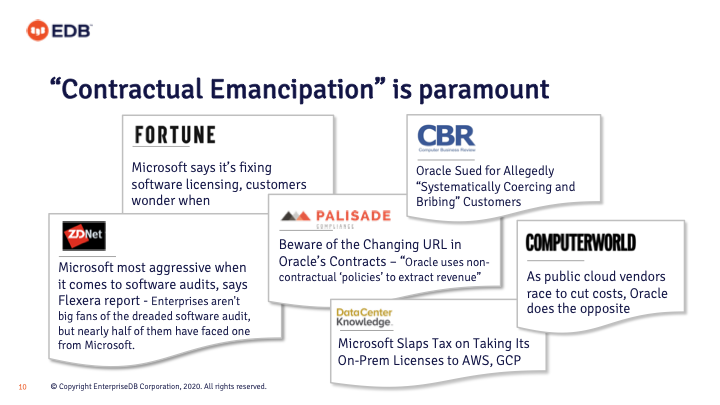 The desire for contractual emancipation from legacy vendors–and those vendor audits—has been growing. Now with its enterprise-readiness, contractual flexibility, and lower overall price, open source is the way forward. Consider these examples:

There is a better way, and it’s open source. We here at EDB bring 100% focus and dedication to open source with Postgres.

To learn more about how open source and PostgreSQL can be used as a strategic tool in 2021, check out our on-demand webinar. 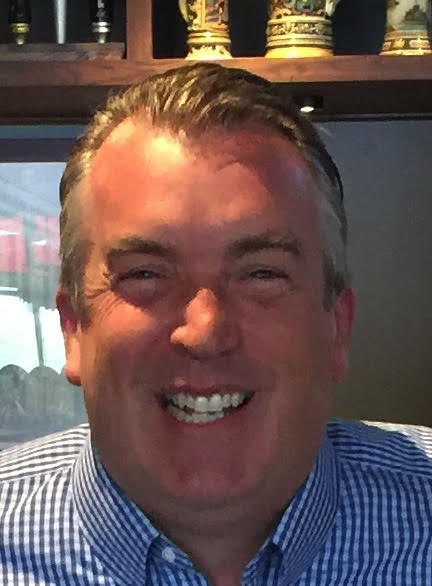 Tom Rieger is a senior solutions engineer for EDB and brings over 30 years of technology experiences across the data landscape always focused on relational technologies. Working in information technologies for companies like Textron and Labatt (yes - the beer) along with vendors like Informix, IBM, ...