During a conversation with $BOSS a couple of days ago the topic of the new Full Text Search in MongoDB came up. He (knowing of, but presumably having never worked with FTS in PostgreSQL) suggested I might create a tool like the one the MongoDB guys were proudly showing off in their keynote video from their recent conference to make it easy to index and search HTML documents on disk. I looked at him with a slight tilt of the head and remarked that it's already easy to do that, and just takes a few lines of Python code or similar.

So, here I am on my flight back to the UK having written 36 lines of code whilst munching on my breakfast and enjoying my free seat upgrade. I should probably note that those 36 lines of code include import statements, comments, blank lines for readability, and a nicely formatted 7 line SQL query that could easily be just one line. Plus, the vast majority of the code is really just boilerplate to read a directory of files and extract their contents.

Anyway, before I can go into that, it was necessary to first create a schema to hold the data we'd need to query. This is basically just a table to hold whatever information you like about each document, with a tsvector column for searching. For my test I decided to make the path to the file the primary key, and to store the title of the HTML document and the text in the body. The body text isn't really needed, but it does make it a touch easier to use a trigger to automatically maintain the tsvector data - plus of course, I could also then use that column and get rid of the source documents.

I also added the aforementioned trigger to maintain the tsvector. I got slightly fancy with this, indexing both the title and the body fields, and giving them different weights for ranking purposes:

Now that we have somewhere to store our data, here's the code to load it with data. This should be run in a Python Virtual Environment that has the psycopg2 and BeautifulSoup4packages installed:

As you can see, the code is pretty simple. It basically just loops around all the HTML files found in the docs/ subdirectory, uses BeautifulSoup4 to extract the document title and body, and then runs an INSERT on the database table. For convenience, the query also handles conflicts to allow easy re-indexing.

To load some data, I created a directory calls docs/ alongside the script, and copied the PostgreSQL HTML documentation into the directory. I could then run the indexer:

Finally, I needed to test the search capabilities. That's done through a SQL query of course, for example;

So here we are selecting the document rank, the path and title of the document, as well as a headline - a small snippet of the document that highlights where the matches were found within it, as you'd probably see on your favourite search engine. That's all coming from the docs table of course, and is restricted by our search query and then sorted by the rank and limited to 20 results.

When we run the query we see the output below which can of course, be used however we like in an application. 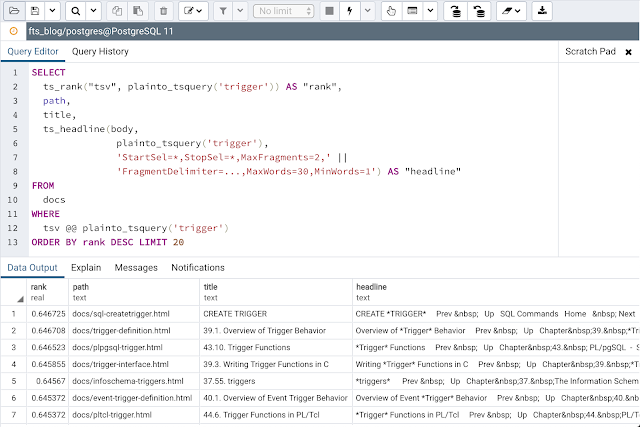 So there we have it; a table with an index and trigger, and a trivial Python script and we have a working indexer and search engine. Oh, and in case you were wondering, no, this is not new functionality in PostgreSQL. It was added to the core server with version 8.3 which was released in 2008. Prior to that there was a contrib module called tsearch2, offering largely equivalent functionality from version 7.4 which was released in 2003. Do try to keep up Mongo 😀

Dave Page is Vice President and Chief Architect, Database Infrastructure, currently working in the CTO team on research and development, best practices with Postgres, and providing high-level guidance and support for key customers. Dave has been working with PostgreSQL since 1998 and is one of five members of the open source project's Core Team, as well as serving as Secretary of the Board of PostgreSQL Europe and Chairman of the PostgreSQL Community Association of Canada. He joined EDB in 2007 and has been influential in the company’s direction and development of critical database management tools and product packaging and deployment. Prior to EDB, Dave spent more than a decade with The Vale Housing Association as Head of IT. He joined the organization after spending four years as an electronics technician with the Department of Particle and Nuclear Physics at the University of Oxford. Dave holds a Higher National Certificate in electronic engineering from Oxford Brookes University and a Master’s degree in information technology from the University of Liverpool.