EFM is a tool that can help users manage a highly available cluster of Postgres (master-standbys). It also helps in the detection of possible failures, recovering and sending notification of failures to users/DBA(s). For EFM, users/DBAs need to have at least three nodes to assure that EFM has a quorum. For three nodes, a user can have either one master, two standbys or one master, one standby, and one witness node.

Let’s have a look at the three-node cluster architecture of EDB Postgres Failover Manager with one master and two standbys. 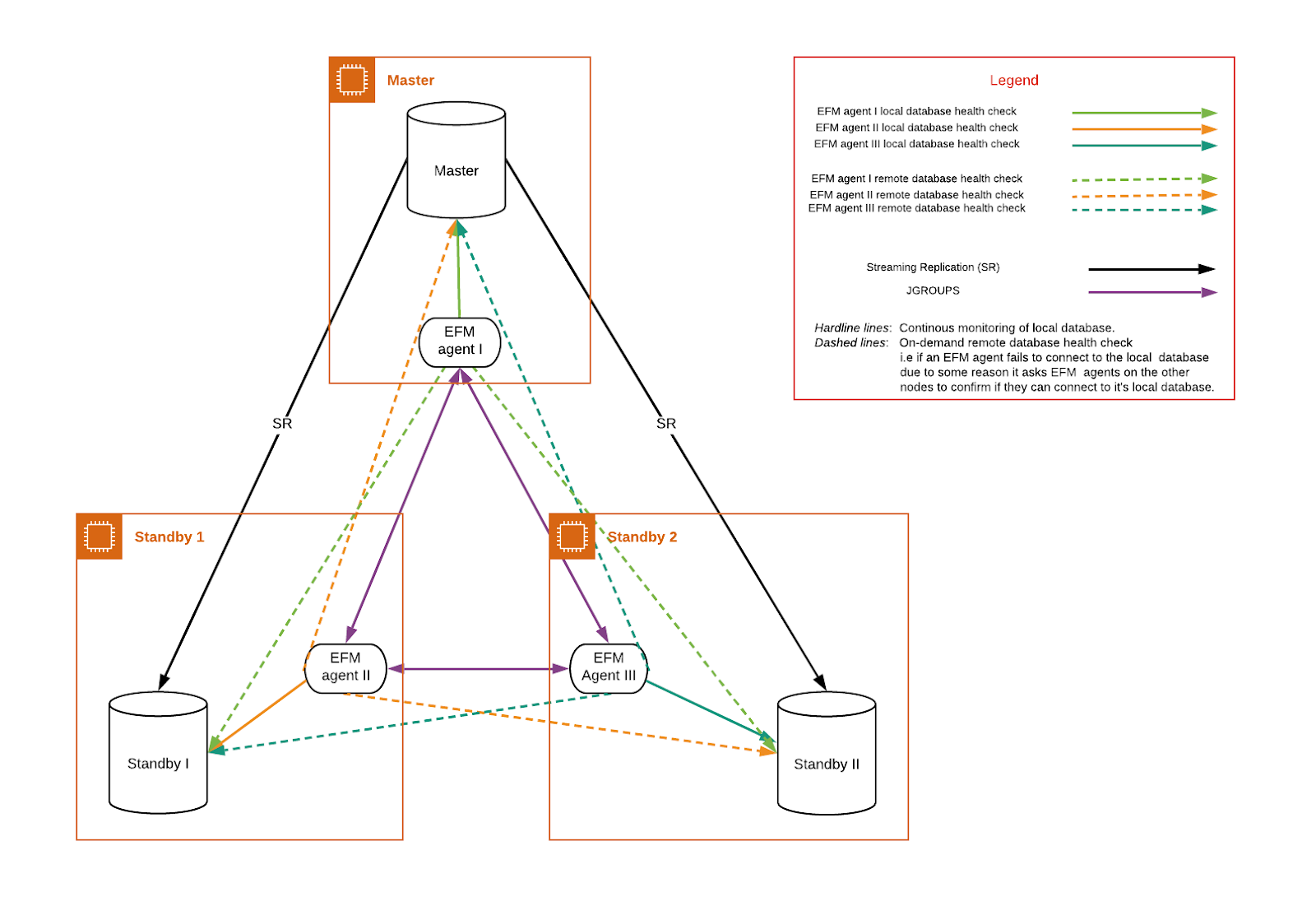 In the above diagram, you can see EFM agents I, II, and III have a hard line for the local database and a dashed line for remote databases. The definition of two are given below:

EDB Postgres Failover Manager has the ability to detect the following types of failures in a Highly Available streaming replication cluster.

Database failure is a failure of the database, however, the EFM agents on the nodes/VM are available and are communicating with each other.

Node failure is a failure when the VM/node is not available due to a crash.

EDB Failover Manager manages to avoid a split-brain scenario after the failover. In the case of a master database failure, EFM promotes a standby to be the new master, and it also makes sure that the old master cannot restart by creating a recovery.conf file in the data directory. This avoids any kind of split-brain scenario, especially if the master failure was temporary or a DBA manually restarts the server.
In case of a master node failure, after failover, if the master node comes back, then the EFM agent checks the status of the cluster with other EFM agents in the cluster. In case EFM agents confirm the availability of another master in the same cluster, then an EFM agent on the old master node creates a recovery.conf to avoid the possible split-brain situation.

Please note that in case of a node failure, it is important to configure the system in such a way that the EFM service restarts before the EDB Postgres Advanced server service.

EFM uses timeout parameters to monitor the local database and for confirming if a database has truly failed. These parameters also determine the total time taken by EFM to failover from one master to a standby  (which has now become the new master). Let’s have a look at these parameters:

The following are the parameters that determine the timeline of a failover.

How Do These Failover Timeouts Work?

Now, you may be thinking why do we have such high value for these parameters by default? The answer lies in infrastructure reliability. We have these values high because by default EFM should work properly in an environment where the network/hardware/servers are not 100% reliable. However, if you use an environment or use a platform provider like AWS/Azure/GCloud that guarantees the reliability of the platform, then you may want to tune these parameters to reduce the failover time.

The following are the parameters’ values we used in the public cloud, based on the reliability of the network and the expected response from the database.

With the above-mentioned custom settings, we saw EFM failover times in the range of 20 25 seconds in public clouds like AWS or Azure cloud within one region with different availability zones and across regions.

With EDB Postgres Failover Manager (EFM), a user can have a highly available Postgres cluster (master/standby/witness or master/standby/standby) with the following capabilities: