I have been in Europe now for more than two weeks meeting a number of our customers and PostgreSQL users at the EDB Postgres Summer School. So far I have been in Zürich, London and Oslo and there are further events in the Netherlands, France, Czech Republic, Italy, and Belgium, the Nordics, Spain and Germany throughout the Summer. The purpose of these events is to offer PostgreSQL users a one-day workshop to hear more about EDB Postgres, the EDB Postgres Platform and EDB Postgres Ark, but also to ask any questions they have about implementing EDB Postgres. If you want to find out more about when EDB Postgres Summer School is coming to your country, check out the website here. 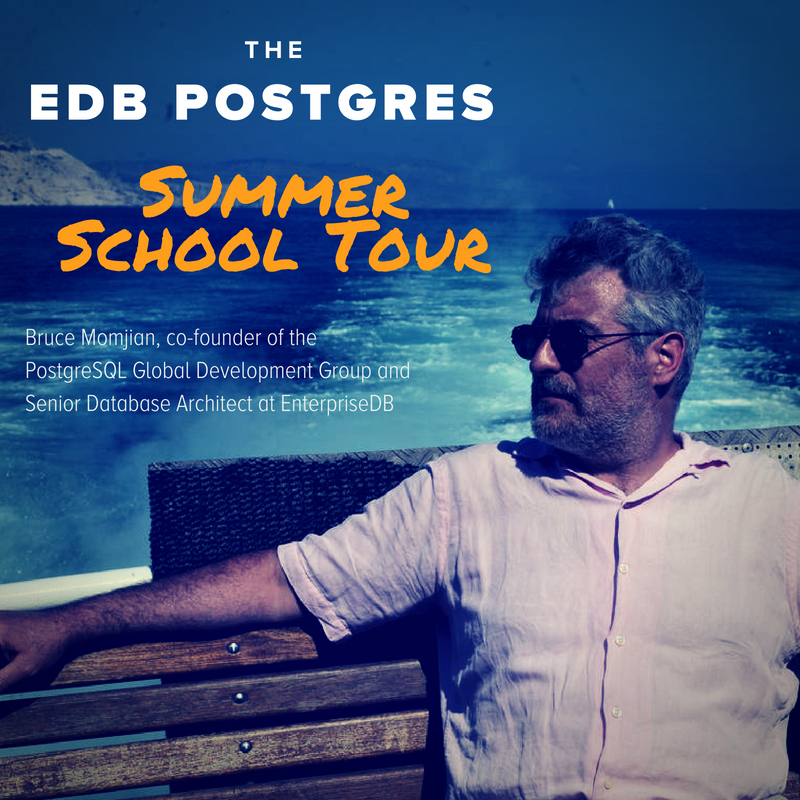 I was joined at the Zürich Summer School by my colleague Jan Karremans and we had an interesting discussion with an executive from a Swiss public transportation company, who was evaluating a move from Oracle to PostgreSQL and wanted to develop a sound business case to convince his colleagues. Like many database users I speak to he found his incumbent provider too expensive and had begun experimenting with Amazon RDS, which he found useful for sandbox development environments, but not for larger scale operations. We were able to provide detailed information about EDB Postgres Advanced Server in the Cloud, which is available on Amazon. We also provided him with a lot of background information on EDB Ark, especially how it simplifies the creation of database instances in the Cloud. We finished off by helping him install a demo version of EDB Postgres Advanced Server on Amazon Web Services.

The following day Jan and I spoke at PGDay Switzerland, which had a real buzz with attendance up by 30% compared to last year. There was a good mix of technical and business-oriented presentations and I thoroughly enjoyed the talk by Daniel Westermann on Postgres 11. (You can see his slides here.) Daniel offered a very effective comparison of the output of Postgres 10 and 11 by opening two terminal windows side by side. He started with his favorite feature --- 'exit' and 'quit' working in psql, or at least issuing a hint. This was a trivial feature I added and I am surprised it got such prominent coverage, but it also received a similar reaction in Moscow earlier this year. I learned something new from Daniel’s presentation, namely that EXPLAIN will not show run-time partition pruning, which was added in Postgres 11. Only EXPLAIN ANALYZE will. In hindsight, it is obvious because EXPLAIN without ANALYZE does not execute the query but only shows the optimizer output. However, it was not obvious to me until he pointed it out. I will have to see if that is documented properly.

I had been invited to close the event with my keynote, “Will Postgres Live Forever?” (You can view my slides here) and from the response afterwards it seemed to go down well. I compared open source with proprietary software, arguing that open source – and PostgreSQL in particular – will live as long as it remains useful; whereas proprietary software comes to an end when the owner of the source code can no longer profit from it. The key reason why Postgres remains useful today is because of the investment in innovation - Full Text Search, NoSQL support, Geometric Types, GIS, Data Analytics and Sharding to name but a few of the innovations! I’m confident we will continue to see PostgreSQL flourish as to date we have had 22 years of annual major releases with approximately 180 features per major release, and I do not see the pace of innovation slowing down at all. In fact, looking at the life cycle of open source software I suggest that we are only at the start of the upward curve for PostgreSQL as we are completing stage one in the life cycle – parity with competing proprietary software. We are about to enter the next phase of market growth which will sustain PostgreSQL long-term!

While I was in the UK we had several events including an EDB Postgres Coffee Update, which is a much more informal opportunity for PostgreSQL users to get together and discuss PostgreSQL with experts from EDB. On this occasion we talked about the implications of Oracle’s long-term strategy for database users and how open source alternatives, such as PostgreSQL, avoid many of the pitfalls that proprietary software creates.

The following day I presented at PGConf UK 2018, which had 140 attendees. The talks were very varied and I shared a 30-minute version of my Non-Relational Postgres talk, which elicited some good feedback from attendees. As part of a packed schedule for the UK, we then held the EDB Postgres Summer School event in London, which kicked off with a long Q&A session discussing where the database market is heading and why open source offers superior solutions to proprietary software. My colleague, Martin Visser, and I went on to present technical information around EDB Postgres Advanced Server, as well as our tooling, support and services solutions to show how EDB can enable the efficient deployment of PostgreSQL in the enterprise.

The final leg of that week was the EDB Summer School in Oslo, where again we had a lot of questions around how to deploy EDB Postgres, its merits compared to proprietary alternatives and deploying PostgreSQL in the Cloud. It is clear from my first two weeks in Europe that the appetite to move away from the restrictions of proprietary software is growing and there is a real desire to use the move to the Cloud as the way to break free.  If your organization is considering moving to the Cloud or looking to migrate databases to PostgreSQL I would also like to recommend the EDB Postgres Boot Camp. This is an opportunity where EDB experts come to your business for a one-day workshop and talk exclusively to you about your goals and how you can begin to plan out your adoption of PostgreSQL. It is free and our goal at the end of the session is to ensure you are able to manage any existing or future Postgres databases deployed in your organization. To organize a date for our experts to visit you just fill in this form.