Exploring Eliminating the ORM from Your Next PostgreSQL Application 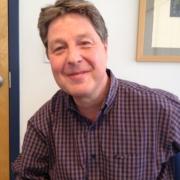 In my most recent blog post, I provided a review of a book soon to be published, entitled  “PostgreSQL Query Optimization” by Henrietta Dombrovskaya, Boris Novikov, and Anna Bailliekova.

I highly recommend this book. It includes many great concepts about the PostgreSQL query optimizer, presented alongside an excellent set of recipes for optimizing queries.

In this post, I’ll cover one of the chapters I found especially interesting. It is about a programming methodology called NORM.

I will start by saying that I have only done minimal application development using this methodology and have done no performance testing. However, the concept has me very excited and I have absolute faith in the experience of the book authors who have used this design pattern in production.

I also admit that there are many ORMs that I have never used.

I am hoping to do a decent amount of development over the next several months using NORM. If things go as I hope and as I expect, I will present my findings in a future blog.

In summary, when reading one of the chapters in the book, I had one of my epiphanies about application development that seems to come to me every decade.

The authors introduced a concept called NORM, which is short for “No Object Relational Mapping.”

So, let’s start by introducing why Object Relational Mapping technologies, such as Hibernate, exist for Java, or why SQLAlchemy ORM exists for Python.

It comes down to two important truths:

Relational databases are here to stay

My evidence for this? Please see DB-Engines database rankings. The results will vary a bit, depending on when you click on this URL. However, as of this writing in February 2021, four of the top five (including the top four) databases are relational databases.

Incidentally, what database gets DB-Engines database of the year based on year over year growth? PostgreSQL! Not Mongo, not Hadoop, not Casandra nor any of the other 250+ plus databases on this list. While we all know PostgreSQL is a lot of things, its foremost use case is as an awesome relational database. Although later in this article you will see one element of why it is more than that.

I spent a long portion of my career working towards proving that point #1 was not true. During the early to mid-90s, I was part of the Object Database industry. We believed that the application development world would converge on a database that stored data the way applications represented and manipulated data. This premise was my passion, and making it happen was my undying mission.

But alas, it did not happen. Object Databases found a small home for certain datasets and certain use cases, but they never became the first choice for business application persistence.

This shortcoming of my mission was due to the fact that business data is best represented in a relational model and third party tools know how to work with this model. Personnel records, payments, orders, and order items fit very nicely into tables and columns. SQL is a great database independent language for examining relational data.

Now, let's flip over to the other side of the equation. Object Oriented Programming Languages started to take hold in the late 80s with the introduction of C++ and, to a lesser extent, SmallTalk. Object Oriented programming was the new math. All developers were desperate to learn it. To overcome the shortcomings of C++, Java followed. In the hype surrounding Java, conferences were held, books were written, T-Shirts were made, universities changed their curriculums to Java.

Anybody not using OO methodologies, and who were attempting the development of new business applications by any other design pattern, were shunned as heretics of the new revolution.

For further evidence for this, please see the Tiobe index. This is a very popular index for tracking the success, adoption and overall market perception of programming languages. Again, the results will vary depending on when you access the link. As of February 2021, here are the top four programming languages:

So, Object Oriented programming is here to stay and so are relational databases. The truth is, they “think” of things differently. It fundamentally comes down to three different worlds:

Here is an example I used back in the day when I was selling Object Databases. Say you are standing in front of the Vietnam War Memorial in Washington DC. Somebody comes up to you and says, “I understand your friend died in the Vietnam War.” Can you tell me where his name is listed? Navigation access… you point to his name. Associative access... I give you his name and you use the alphabetical order listing to find it.

On top of Navigational vs. Associative access, Object Oriented programs are developed imperatively, relational databases are accessed declaratively. In simple terms, OO programs do what you tell them to do (imperative). SQL gets the results you want and it will decide how to do it (declarative).

To illustrate the Object Oriented model vs. the relational model more concretely: when an application has an Order Object to store in the database, it is not as simple as just adding one row to the Order table,—because the OrderItems belong in a separate table. In a more complex scenario, an application Order Object may have sub-classes like ExpressOrder or International Order expressed through inheritance relationships. The inheritance model needs to be “flattened” into tables.

This combination of issues creates what is referred to as “The Great Object Relational Impedance Mismatch.” OO programmers are stuck in one world DBAs and database developers stuck in another. This can become the source of two major business issues:

In my opinion, the most prevalent formula for enabling both of these is the use of ORM technology. An ORM enables programmers to turn the interface with the database into a set of classes. Oftentimes, an ORM tool is pointed at an existing database and out comes a set of classes that the programmer can use to develop his business application.

This works well for a small data set but when the database schema begins to change, performance and maintainability issues start to creep in. Users start complaining about performance issues, getting features added to the application takes longer than expected and depending on organizational dynamics, the database team and the application development team wind up blaming each other.

Here some are the contributing factors to this issue:

The concept is brilliant in it’s simplicity. It might need a cooler name though. A subject of a future blog I hope.

Effectively, there is a contract defined between the database and the application. The contract is expressed between these two layers as a JSON document. The application will call a function with these parameters and you will send me back a JSON object graph that gives me exactly what I am looking for in one trip. So the model for retrieving an object looks like this: 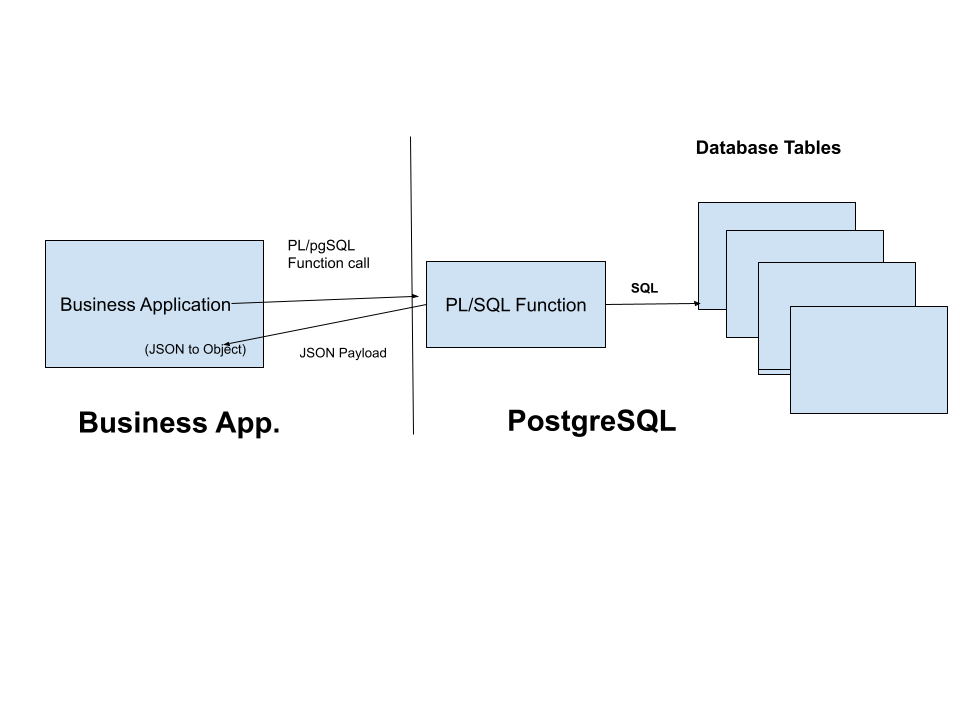 And the workflow for storing an object would look like this: 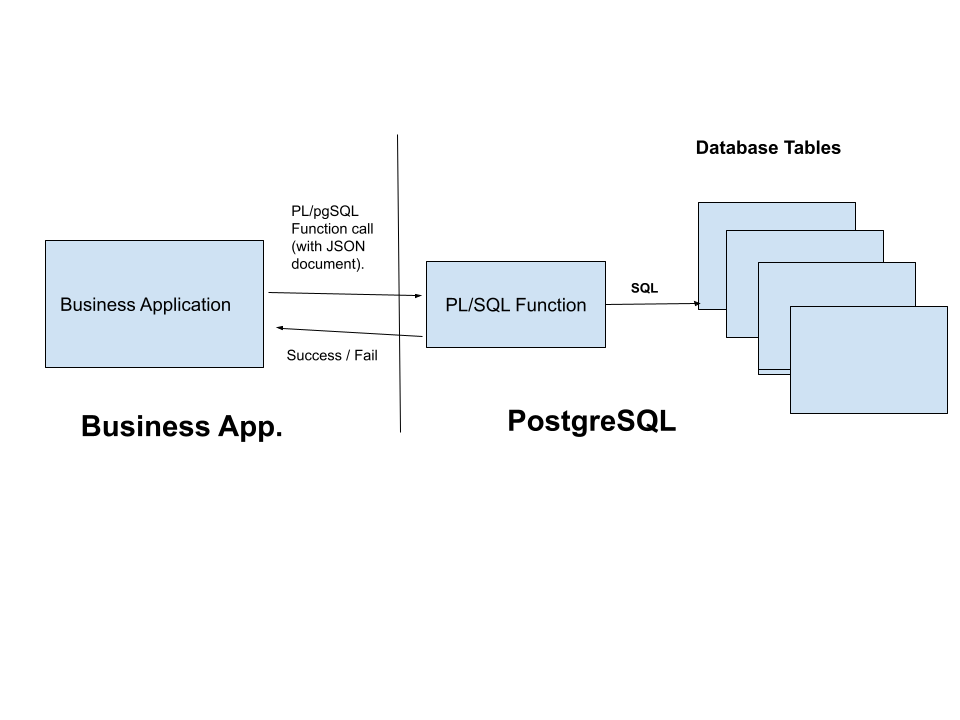 Note, the data is not stored in JSON format. It is broken down into its native table format via the PL/SQL functions. This enables us to keep the full power of SQL with things like constraints, specific data types and foreign keys. It also allows third party reporting tools to access the data with standard SQL. However, if you want to store the data as JSON object instead, and give up the previously described benefits of using the relational model Postgres has excellent support for native JSON data types.

This approach was not possible during the rise of Object Oriented languages. JSON did not exist in any adoptable form for either database or applications. However, now most object oriented  programming languages have excellent support for serializing and de-serializing objects to and from JSON. In addition, the support for JSON is Postgres is absolutely outstanding. Perhaps better pure JSON database. Postgres was built from the beginning to be extensible for new Data types and this has allowed the community to thoroughly embrace JSON. Postgres has such an advantage over other databases which are pure document stores. All these databases wind up attempting to layer SQL on top of whatever underlying model exists. It is very difficult for this approach to be successful.

So why am I so excited about NORM?

If you are interested in further information about NORM please check out the github project here, and watch our on-demand webinar to learn how to power JSON with PostgreSQL!